Charles H Weinbaum, Jr. was born on November 23rd, 1926 in Beaumont, TX. Charles “Charlie” grew up loving hunting, fishing, and sports. As a boy, he enjoyed his summers at Camp Stewart for Boys in Hunt, Texas. Charlie attended Beaumont High School where he was a leader and very proud Royal Purple Scholar/Athlete. As a senior, he was awarded the “John Gray Scholar/Athlete Award” in 1942. After graduating high school, Charlie attended The A&M College of Texas majoring in Industrial Engineering. While at A&M, Charlie lettered in basketball and was a member of the Hillel Club, the Beaumont A&M Hometown Club, and the Corps of Cadets.

In 1945, Charlie was drafted into the U.S. Army Air Corps during WWII. He was in Scottsdale, Arizona training for action in the Pacific Theatre when the war ended. After the war, Charlie returned to A&M to complete his degree and graduated in 1947. Post-graduation, Charlie came home to Beaumont and joined his father in the Weinbaum Insurance Agency. After a one-year stint in graduate school at NYU, Charlie returned home to enter the insurance and real estate business.

In addition to family life, Charlie was very active and involved within the Beaumont community. He served as a volunteer and contributor to dozens of educational and nonprofit organizations throughout his life. Some of his many contributions include his membership in the Rotary Club of Beaumont where he served on the board of directors as well as president, founder and chairman of the “Camp Enterprise” program, member of the Jaycees, president of the Beaumont Club, and member of the YMBL where he served on the board of directors. Charlie also served as a member of the Grand Jury and was a founder of Texas Bank of Beaumont. In addition, Charlie established the Beaumont A&M Club “Outstanding Teacher of the Year Appreciation Award Program” and ran the program for over 40 years.

For 17 years, Charlie served the West End Little League as coach to each of his four boys and hundreds of children, teaching baseball and sportsmanship. In 1973, his all-star team even competed for the state championship in Waco, TX.

In 2014, Charlie was honored, along with James Broussard, to receive the first ever “Rabbi Samuel J. Rossinger Humanitarian Award” presented by Temple Emanuel in Beaumont. He was also a “Paul Harris Fellow” of Rotary International. Of all the many awards and recognition that Charlie received over the years, being named “Aggie Parents of the Year” in 1982 alongside his wife Gloria, and later being named a Distinguished Alumnus of Texas A&M in 2008 were among the greatest honors of his life.

Charles H Weinbaum, Jr. lived a long, happy, healthy, and productive life. His generosity, kindness, and positivity left an indelible mark on all who knew him and he will be greatly missed.

If you are unable to attend in person, a virtual option is available via zoom. The link and password to the ceremony is below: 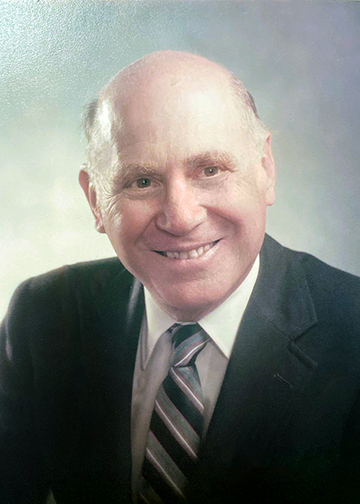 Charlie was such a wonderful man. We have such respect for him and and the way he lived in his life.
Our sincere condolences for you loss.
Barb & John Vaughn

Bo, I’m sorry for your loss. I’m praying for you and your family.

It has been an honor and privilege to know Charlie Weinbaum.He always had a kind word and smile.He made the Jewish holidays very special simply by being there.His humor and warmth will greatly be missed.
Dan and Cara Eisen

Oh, how I will miss my “Energizer Bunny” Aggie! He was always charming and friendly, supportive and helpful, and he possessed a wicked sense of humor. We shared a silly phrase and he never failed to exclaim it when we greeted one another. How are you? “Okie dokie!” Oh, Charlie, you were more than okie dokie. You were the best of the best. A lot of hearts are broken at losing you. Your memory is and will remain a blessing to all who knew you. Deepest sympathy to your family and many friends. pb

Prayers of comfort and peace for the family of Charlie Weinbaum. I know his passing leaves an empty space in your lives. He was a wonderful, cheerful man and he will be greatly missed. Rest in peace Mr. Weinbaum ❤️

Mr. Weinbaum was a true gentleman and leader. He will be remembered by us for his kindness, generous spirit and dignity. We will miss him. Condolences to his family. God bless you.

I was so impressed with Mr. Weinbaum’s zest and energy – He was so loved by mom and Dad (Alex and Marie) –
Earliest memories were seeing him and his family at the BCC – by the pool –
Those were great times indeed!

God bless Charlie Weinbaum ! I am sorry to hear he has passed. He was such a nice and kind and smart person. I enjoyed knowing him. He was my father ‘s friend and he was my friend. He was a fixture at the Beaumont Club for the lunch bunch. He will be missed.

Coach Weinbaum was such a great Aggie and he will not be forgotten! Who else could have made the Red Tops become the Maroon Tops and win it all? Thank you for all your baseball wisdom you shared! I will miss you! Gig Em!

Charlie was a true gentleman. One of the good guys, for sure. Prayers of peace for his family.

Was saddened to hear of the passing of Charlie. He did a lot for the city of Beaumont as well as Texas A&M. End of an era for sure. He will be missed.

RIP Charlie my friend over 50 plus years Prayers for the family as I pray.

It was our honor to know Charlie through Texas A&M groups. His impact on Beaumont will last for years to come. Our condolences and prayers of comfort to all of the family. Nancy & Mark Browning

I met Mr. Weinbaum in 2011 and rented an office from him. He was a very kind man. I last spoke with him over the phone in 2020. Sorry to learn of his passing. Condolences to the family.

Mr Weinbaum was my father’s good friend. He was a very good person. My late father, Anthony Brocato, would see him at lunches at the Beaumont Club. I enjoyed talking to Mr Weinbaum. Our prayers are for him and his family.

In my youth there are people that had a positive impact on my life that even today I can say their influence guides me still today. Charlie Weinbaum was one of them. I offer my condolences to the family but know he lives on in all that crossed paths with him.

We have known Charlie for over 50 years and he is a great
fellow Aggie and Rotarian and he will certainly be missed by all. Our thoughts also go to his Family.

I’m heartbroken to learn of his passing. I was his pharmacist at Market Basket and absolutely looked forward EVERY Saturday to his visits where he’d call me his “honey” and give me a big hug. He was such a good man. I will never forget him and will miss him forever.

Charlie was a great friend and never met a stranger. He was kind and thoughtful and dedicated to his family, A&M, his faith, Beaumont and the Rotary Club. We will miss Charlie who lived a wonderful live and made our lives better by knowing Charlie. Gig em my friend and we will say Here at Muster. Michael and Cynthia

Charlie was a devoted father, a loyal-to-the-core Aggie, and a caring friend. He would literally give you the shirt off his back. He will be missed by all who had the privilege of knowing him.

Prayers of comfort for all of Mr. Weinbaum’s family. I’ll always remember what a kind, “gentle”man he was.
Chrissy Dryden Neal

Coach, you made your mark here on earth!!! I’ll certainly miss seeing you!

My sincere condolences to the Weinbaum clan. Charlie was one of my best friends – always a pleasure to share his company. I am so sorry.