Charles Newcomer Lewis peacefully entered Heaven in the late evening of May 6, 2020, in Beaumont, Texas. Our family’s patriarch, better known to most of us as Daddy, Dad, Dedaddy, and Uncle Charles, lived a very full life of 94 years.

Born October 7, 1925, in Wiergate, Texas, Dedaddy grew up in a small sawmill town near Newton, Texas, where he began to develop what would become a lifelong love, understanding, and appreciation of God’s great outdoors. Many family and friends of Dedaddy have numerous memories and stories of “the woods” – a large area of land Dedaddy purchased with his father. Over the course of Dedaddy’s life, the land became the site of countless picnics, camp-outs, deer and squirrel hunts, cookouts, and celebrations, as well as a place Dedaddy might have spent close to as much time as he spent at home! Dedaddy also cultivated a large garden in his backyard that supplied the vegetables for many homecooked family dinners, as well as aloe vera plants and mayhaw trees that many of us now have in our own yards.

As a high school football hero (nicknamed “The Mule, ” perhaps for both his strength and strong will), he received a scholarship to play football at Southern Methodist University in Dallas.  His time at SMU however was cut short as he answered the call to serve his country as a Pharmacist’s Mate Second Class in the Navy during World War II in San Diego and Japan. As part of the occupation in Japan after the atomic bomb, he has memories of impressing the Japanese with his size and strength. Dedaddy’s older brother, Captain Benton Lewis, died in WWII as a pilot. As a member of the Greatest Generation, Dedaddy’s life was largely defined by WWII, and we are so grateful for his service. As part of the Reserves, he also served in the Korean War while stationed in Corpus Christi.  After leaving the service, Dedaddy had a successful career as a pipefitter with MobilOil in Beaumont, Texas.

Dedaddy was blessed to grow up in a family that, although much larger now, remains very close to this day. He was preceded in death by his mother, Bessie Newcomer Lewis, his father, John Benton Lewis, his eldest sister, Dorothy Lewis Self, and his older brother, Benton Lafayette Lewis.  Dedaddy is survived by his younger sister, Wanda Lewis Stanton.

Dedaddy was also preceeded in death by the love of his life, Helen Jean Fort Lewis, as well as their infant daughter, Patrice Lewis. Memommy and Dedaddy grew up together in Weirgate and had a love story worthy of books and movies. They were high school sweethearts, weathered Dedaddy’s Navy service during WWII, had four children together, and grew old together.  They celebrated their 70th wedding anniversary shortly before our Memommy passed away in 2016.  One of their favorite things to do together in recent years was watch the sunset from the lookout point over Toledo Bend after spending a week together at the lake each summer with all of their children, grandchildren, and great-grandchildren. Dedaddy and Memommy were known for their fierce love for each other and always holding hands – something they did constantly up until Memommy’s passing.  We’ve heard stories of Dedaddy surprising Memommy after coming home from the service – we know there’s a similar reunion going on in Heaven now, which probably includes some jitterbugging!

Dedaddy was most proud of his family.  His oldest daughter, Susan Lewis Binks (spouse: Jackie Binks), was Dedaddy’s pride and joy.  He enjoyed following her adventures throughout life, even attending Aggie baseball and football games with her in recent years.  Dedaddy’s son, Charles “Chuck” Benton Lewis (spouse: Laurie Bauer Lewis), was the sparkle in Dedaddy’s eye.  Dedaddy always got a special look in his eye when talking about his only son – he was and is extremely proud of Chuck.  Dedaddy’s youngest daughter, Karen Lewis Parsley (spouse: James Parsley), was Dedaddy’s angel throughout life.  She cared for Dedaddy in a special way that no one else could.  Our entire family is especially thankful to Karen for caring for Dedaddy so well.  Dedaddy also has numerous nieces, nephews, and cousins that survive him as well, including Patricia Watson, Virginia Martin, Colleen Hodges, Lisa Caldwell, Rick Monroe, Scott Monroe, and Daphne Miller.

Dedaddy has six grandchildren and five great-grandchildren.  In birth order: Emily Binks Cantrell (spouse: Nick Cantrell), Amy Binks Sanderson (spouse: Perry Sanderson III), Adam Charles Lewis, Carly Vee Lewis, Gracie Janelle Lewis, Kevin James Parsley, William James Cantrell, Perry Eugene Sanderson IV, Lily Grace Cantrell, Troy Gabriel Sanderson, and Cate Helen Cantrell.  We all recall his constant presence at all our sporting and academic events, as well as all the outdoor lessons he taught us. In fact, we are quite sure his knowledge of pine trees, among other things, exceeded the information on display at the Big Thicket Museum!

Dedaddy was a fierce protector of others – from his military service to our country, to his firm belief in the protective freedom guaranteed in the 2nd Amendment, to keeping a careful eye out for his great-grandchildren. He was also so generous – not just with his money, but with his wisdom, his wit, his humor, and his smile – not to mention, yearly Christmas chocolates for all! Dedaddy was remarkably tough and strong – chopping wood through his 80s and living on his own in his home through his 90s, but his love for us was his strongest characteristic of all and unwavering until his last breath. He taught us all so much through both his words as well as the way he lived his life, and there is no doubt his legacy will live on in all of us.

I have fought the good fight; I have finished the race; I have kept the faith. – 2 Timothy 4:7

A family graveside service will be held at Jasper City Cemetery, Jasper, under the direction of Broussard’s, 1605 North Major Drive, Beaumont. 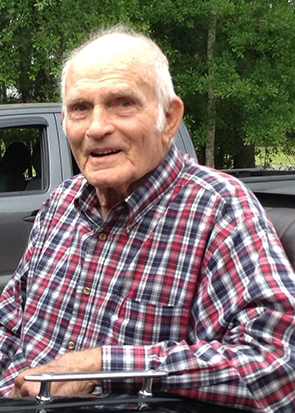 We are so sorry for your loss. After reading his life story sounds like he was an amazing man and had a wonderful life. Our prayers go out to your family..

Being an extended part of Mr. Lewis's family, we sincerely enjoyed the times we spent with Mr. and Mrs. Lewis. They were truly good, caring, and Christian people that were loved by many. Our love and prayers go out to the entire family.

Sorry for your loss Adam. Nothing like sitting around with are older's listening to there amazing stories. I am sure it will be missed.

I will miss my dear Uncle Charles so much.

I will miss Mr. Lewis ! He was a very special friend . We had so many great and fun times at his land . Hunting, ,camping ,cooking . And just hanging out . Rest In Peace !

What a fabulously fulfilling life, my prayers are with all of you.

Uncle Charles, you were much loved and will be greatly missed by all of us. Earlier today before reading these remembrances of you, I was thinking about you and Aunt Monnie being together again, and these words came to mind: "I'll bet there's some jitterbugging going on in Heaven about now." I was pleased to see that same thought was included in your obituary, so obviously I wasn't the only one who pictured that happening. Susan, Chuck, and Karen, you and your families are all in my prayers. Your parents truly lived for all of you.

I am so very sorry for your loss, Susan. What a remarkable life he led. I know you will cherish the memories.

Our thoughts and prayers are with you and entire family.

I will miss my buddy Charlie. My prayers and thoughts are with your. family.

My sympathy to the Lewis Family. I spent many friday nights on cook outs and camping on the Lewis's land. Wonderful memories from both Mr and Mrs. Lewis.

Susan so sorry to here of your dadâ€™s passing. What a wonderful life he had and such a beautiful family. Love & prayers to all of you. Much love, Sharon & Johnny Passmore

So very sorry for your loss. He lived an amazing life & leaves behind a beautiful legacy!! Prayers for Susan & her entire family......we love you!

How lucky you are to have a wonderful Daddy for such a long time. My thoughts and prayers are with you. Jeanne