Ed was born during World War II while his father was defending our country.  He grew up in West Point, Mississippi where he learned to hunt and fish and excelled at nearly every sport he ever tried.  He went on to play 2 years of college football in Scooba, Mississippi.  From there he continued his education at Mississippi State University where he initially hoped to become a veterinarian with his love of animals, but ultimately graduated with a degree in education.

He gave back to his childhood community of West Point by teaching and coaching.  His degree in education took him to the tiny town of Big Piney, Wyoming where he moved site unseen to teach and coach in the school system.  This move allowed his adventurous spirit to flourish and provided many opportunities for him to grow all the hobbies he already had and gain more.  His hobbies included guitar picking, participating in archeological digs near Jackson Hole, countless hours arrowhead and antler hunting in Sublette County Wyoming, thousands of miles walking/hiking/running/driving through the Wyoming/Teton/Wind River Mountain Ranges, cross country and downhill skiing throughout Wyoming and Utah, and of course his number one hobby of hunting (both rifle and archery) was further refined with the plethora of large and small game animals available in the great state of Wyoming.  Possibly his most well known hobby by ANYONE who met him was his propensity to tell story after story after story……after story…..with the truth sprinkled throughout for the listener to piece together.  (His embellishment game was strong to say the least.)  He raised his family in Big Piney and got to teach both Mike and Michele in 5th grade.  He instilled in both of them a love of the outdoors and taught them to respect life-especially respect for animals, whether it was loving the family pet or in the sight of your rifle.  With only one short break when he moved back to Mississippi to help care for his father after a life changing stroke, Ed remained in Wyoming until the early 1990’s.  He worked a short time in the oil and gas industry after returning from Mississippi until a position opened for him to return to coaching and teaching.

Houston, Texas gained this tall tale teller when he left Wyoming in the early 90’s.  He continued working in education for the next 20+ years, influencing many young lives in and around the Houston metro area whether in the classroom or on the pool deck/football field/golf course while coaching.  Thanks to the warm weather Texas offered, he rekindled his love of golf, gaining many friends while on the course.  As per his normal, he was typically the best golfer in any foursome, just ask him!  Kidding!  He actually typically was the top golfer in the group.  It was on the course that he met his best human friend, Dennis, who was thankfully there for Ed when he needed him the most in the end.  This is also where he met his best animal friend, Shadow who was by his side every minute of every day to the very end.

Retirement from education came after almost 50 years.  Because Ed always had to be doing something, he didn’t stay retired long.  In 2013, he started a position with Bass Pro Shops in Pearland, TX, where he fit right in. He was in his element talking all things hunting and shooting.  He even reassured a pregnant Bass Pro Shop co-worker he could deliver her baby if necessary because he’d done it several times while volunteering for the Big Piney Fire Department.  Her response, “Ed, the hospital’s only a mile away.”  His response, “I’ll take care of you.”  (It’s ok to laugh here!)   He absolutely loved this job and the friendships he established while there.  After nearly 10 years at Bass Pro he was fortunate to be offered a job at a slower pace for his “old bones.” (His words, not ours) Gordy and Sons was kind enough to give Ed the position that he thought was a once in a lifetime opportunity to work with customers who shared his love of premium firearms he thought were works of art.  They gave him the opportunity to share his charm in their shop.

Clearly Ed was passionate about his careers and hobbies, but nothing can compare with the love he had for his 2 children and 6 grandchildren.  Every time one of his grandchildren reached out, he lit up like a falling star.  He spent countless hours attending events that his grand children were participating in and if anyone would listen, he’d talk their ear off about them.  Jake, the oldest……what can we say, but baseball, baseball, baseball.  Cullen, again, baseball, baseball, baseball. Jake and Cullen both had their first successful deer hunts with Grandad, with many hunting trips after that.  Katelyn, dance-let’s just say, grandad has seen everything from ballet to kick line.  She is his Beaumont Princess.  Mia, all things art and academics-he flew to Colorado for her state spelling bee even though spectators weren’t allowed, in order to show his pride.  She is his Colorado Princess.  Solomon- his oldest bonus grandson, they made 2 halves of whole with their matched passion for the outdoors, hunting and fishing.  He was also proud to hear about his football and baseball.  Tytus-rounds out the grandchildren-Ed was excited to share his love of guitar with Tytus.  He would put a chair in the driveway to watch Tytus shoot hoops in the cul de sac and listen to him talk about football.

Ed spent countless hours traveling, with his trusty side kick Shadow, between Houston and Beaumont visiting with grandchildren Jake, Cullen, Katelyn, Solomon and Tytus, as well as daughter-in-law Sue (who he dubbed Susie Homemaker, because she makes her home so warm and open to him) and son Michael.  He was able to pass along his love for the outdoors with them.  He was known to spend weeks on end in Colorado visiting with granddaughter Mia and daughter Michele.  He had “chosen family” in Colorado with all the friends he met on the golf course and in the pub when he was visiting.

In his last few weeks, he spent time preparing for the upcoming hunting season in Southeast Texas.  Filling feeders, checking game cameras and visiting with his new found friends on the lease.  On Sunday afternoon 11/13, exactly 1 week before he passed, he was sitting in a deer stand doing what he loved most.  It was a successful hunt, as expected from Ed.

A gathering of Mr. Dickerson’s family and friends will begin at 1:00 p.m., with his memorial service to follow at 1:30 p.m., Saturday, November 26, 2022, at Broussard’s, 1605 North Major Drive, Beaumont. His cremation arrangements were handled through Broussard’s Crematorium, Beaumont.

Mr. Dickerson’s memorial service will be livestreamed and available to view at the following link: View livestream here. 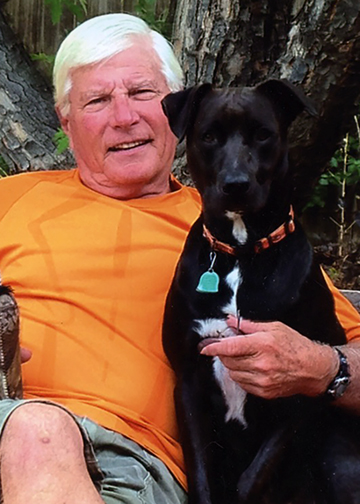 Bob joins me in sympathy and prayer that you will experience God’s love and comfort as you face this time of great loss. Christ’s Peace. ✝️🛐 Priscilla WPHS C/O ‘63~ Bob WPHS C/O 1960

I had the pleasure of knowing Ed over the past five years, through our mutual friend, Dennis Lagadinos, Ed’s best friend. Ed and shadow would come over and he would get right to telling his stories we played golf and we would go out to eat at his favorite restaurant Vaqureos.

Ed was my neighbor for the past 17 years in the Quail Valley Townhomes where we lived. We generally saw each other when both of us were either coming or going but with each interaction, Ed would either holler out “Hey Andrea! How are doing?” or either come and hug my neck and catch up for a few minutes. I would hear him outside my window walking Shadow (who finally warmed up to me this past year!) and as I told Mike, I always felt safe knowing that he was next door. Ed could not have been a better neighbor or friend and I will miss him dearly.

Eddie was a sweet, hard working young man when we taught swimming together at the West Point Municipal pool. After the students left I had a life saving class for all the assistants. Eddie is the only person I have ever known who could not float at all. We had some laughs in recent years when we re connected on Facebook and I found he had gone on to apparently be a much loved teacher and successful swimming coach

Eddie was younger than I but I played with him and his sisters. I grew up on Commerce Street in West Point, and the Dickerson’s lived at the end of the street on the corner. We walked to school together good memories.

So sorry to hear of Eds passing. Ed was a good friend and great companion from our days at West Point High School
playing baseball and basketball to my seeing him on my last trip to Houston this past summer. He will be missed so much.
.

As “Eddie’s” high school classmate who had not seen him since that 1961 graduation night, I recall that he was the catcher for a competitive Little League team long ago in West Point, Ms. As you remember him, may you only remember the good times. Homer McLemore-Maine

Ed,
It seems like only yesterday we all began our professional lives as teachers in Big Piney, Wyoming. You were someone we enjoyed spending time with.
You gave of your time when my classes studied about Indian history. My classes especially liked the Indian headdress you brought each year and the lesson you gave on making ancient arrowheads. You were a wealth of knowledge…God Speed Ed, God Speed.

Sorry to hear of Ed’s passing. Thinking of his family at this difficult. I knew Ed at West Point HIgh School, Class of ’61.