Don graduated from Robert E Lee High School in 1957 where he lettered in football. After graduation he attended Del Mar College on a football scholarship for two years. Don then went to Lamar to play three more years of football where he was Tri Captain of the 1961 Tangerine Bowl Championship Team. While at Lamar he met his wife, Kay, after earning his degree in Education and Business he coached high school football and girls’ basketball.

With the birth of their first son, Randy Ray, and second son, Terry Ryan, he decided to step away from coaching to be able to spend more time with their sons and coach them as they mature.

He went into the insurance business with New York Life for a number of years. Don then had the opportunity to head up a Financial and Insurance department for a local auto dealership, later going into sales where he spent over thirty years until his retirement.

He loved coaching his sons and their friends for years and when his granddaughter Morgan began playing softball, he also coached her.

Don was an active wade fisherman and was known as the Fish Whisperer of Crystal Beach. He loved playing golf with his golf buddies each week. In June of this year, Don welcomed his first great-grandson Bryan Beaver by his oldest granddaughter Katherine. In recent years he enjoyed supporting Lamar Women’s Softball and Basketball teams. Don was a member of Calder Baptist Church where he served on different committees.

Left to cherish Don’s memories are his wife, of sixty-two years, Kay LeBlanc Ptacek; son, Randy Ray Ptacek and his wife, Kim; granddaughters, Katherine Beaver and her husband, Kaleb; Morgan Ptacek; great-grandson, Bryan Beaver; special cousins, Sheryl and Pat Shepherd and their children Kayla and Colson Shepherd, whom Don thought of  as his own grandchildren; and numerous cousins.

Don is preceded in death by his parents and son, Terry Ryan Ptacek. 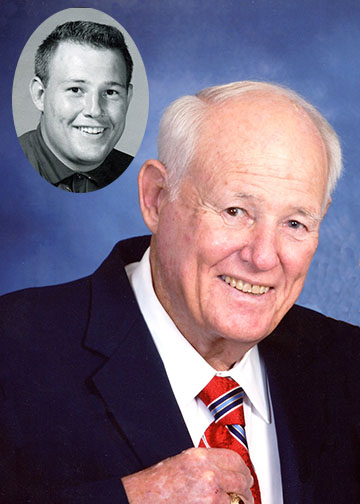 Dear Kay, I hated to learn of your loss. I still cherish all the good times I had working with you and it was funny that Don had sold me a car before you and I worked together. You made a perfect match. Both of you the sweetest, most pleasant people to be around. I know your strong faith will give you comfort as well as all the friends around you. If I could get close enough, I’d love to hug you tightly. My deepest sympathy to you and the rest of your family.

Dear Kay, I was so very sorry to hear about Don. We go back many years, especially through the ball park times with the boys. He was a very nice individual, may he rest in peace.

We knew Don through his wife, Kay. We appreciated his helping us any time we were looking for a car, either for us or for one of our children. He always steered us in the right direction. Prayers for Kay and all his family.

I truly enjoyed getting to meet him and take care of him. Such a gentle soul. I am praying for your family.

Ms. Kay, I am so sorry for your loss. May you find peace and comfort thru your life of memories. You are so often in my thoughts. Prayers for you and your family.

RIP Coach P. Caldwood Cowboys pride never dies!! You taught us more than you will ever know. God bless you.

Kay, you and yours are very much in our thoughts and prayers at this time. We extend to you our deepest sympathy.
Alex and Kay Liebling

Kay, I feel your pain. God give you the strength and pease you need. Much love 🙏🏻

I am so very sorry to hear that Donnie has passed, Kay. Much love to you and the boys. Praying for peace and comfort for you.

Mr. Ptacek was a great guy. He always gave his time and efforts to family and friends. He will be sorely missed.

So sorry for your loss. May GOD accept him into His loving heart and grant him salvation and a eternal life as a member of the family of GOD, in Heaven. I’ve known Don for many years. His sons and mine played youth flag football together, Don’s team always won. Played cards with him, on a weekly basis, for years. Used to see him, on the golf course, with his friend, and Lamar football team mate, Nader Bood. Don always had such a cheerful, happy-go-lucky, disposition. Always a smile on his face. RIP.