Eric Neal, 33, of LaBelle, died Wednesday, March 24, 2021. He was born on October 4, 1987, to Laurie Jean Crowder Neal and William Keith Neal, in Beaumont. Eric worked as an engineer for OCI Beaumont.

Eric had many interests and hobbies. At the young age of 2, Eric found a love for video games. He loved them so much, his parents had to unplug the game so he’d go to sleep. In fact, oftentimes when his parents thought he was crying out for a bottle, he was actually crying out for his Nintendo. His love for video games continued for many years, and Eric always had the latest gaming console. He also loved playing sports, but especially baseball. He had a successful high school baseball career for three years on the varsity team with several play-off games and victories. In fact, Eric’s last pitch was a play-off victory.

Eric was also an avid fisherman. He loved going out on the lake in his boat, especially with his dad. One of his proudest fishing moments was in 2019 at the Big Bass Splash, the last tournament he was able to participate in. He came in 2nd place for the hour with a bass weighing in at 7.59 lbs, winning him $2000.

Eric’s most recent hobby has been collecting sports cards and other memorabilia. He and his dad did some collecting back in 1992 when Eric got a Troy Aikman card. Though they stopped collecting after a while, he picked it back up in the past couple of years. Eric has made many new friends through the card collecting community, and it brought him joy during his battle with cancer.

Other things that Eric enjoyed include listening to Texas Country music, sitting by the fire and watching Texas A&M football games. He was the loudest, proudest member of the Fightin’ Texas Aggie Class of 2010.

To know Eric was to love him. He was voted Mr. Longhorn the Hamshire-Fannett graduating Class of 2006, and this group has continued to support him throughout his journey. He also made many friends through college and career. Eric loved to be surrounded by friends and loved ones and never met a stranger.

Eric’s selfless, genuine, and caring personality made him so well loved. Eric always gave 110% in everything he did. Whether it was work, or giving his time and attention to others, he was always intentional and sincere. He provided for his loved one in ways most wouldn’t even think of. We all are better people for having Eric in our lives. Eric fought with courage and dignity and never lost his faith. His legacy will live on forever and continue to change lives for the better.

He is preceded in death by his maternal grandmother, Dolores Crowder.

Memorial contributions may be made to the Eric Neal Benefit Donation Fund (to be used in the community as a scholarship fund), referencing account number 2213347160, at any Wells Fargo location; MD Anderson Cancer Center, referencing Sarcoma Care in the memo, P.O. Box 4486, Houston, Texas 77210-4486 https://gifts.mdanderson.org; or Gideons International, P.O. Box 97251, Washington, DC 20090-7251 www.gideons.org/donate. 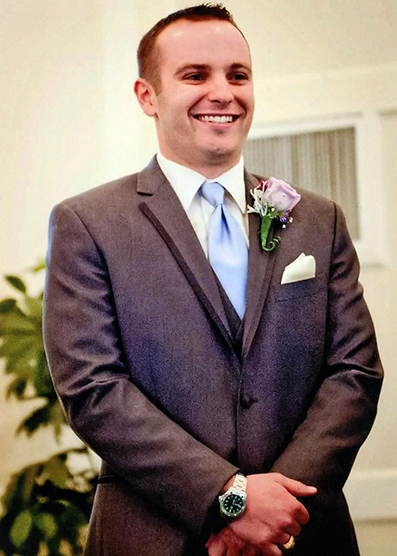 You will be sorely missed by many! Your funny comments and fun attitude was contagious! Go rest high on that mountain; fly with the angels lil Buddy! Many prayers for all the family and friends during this difficult time.

My prayers are with the family .

Shelby, I am so very sorry for your loss. May God be with you during this difficult time in the months to come. We will continue to keep you and your family in prayer. Hugs ❤️

Eric was a large part of my "work family". i will truly miss our conversations and friendship.. He is surely in a better place..

Love and prayers to you all.

To the Neal Family and sweet Shelby. I am so sorry for for your loss. Cherish the memories you had with him and the love he had for everyone as those memories will always be in your heart and always on your mind.

My thoughts and prayers are with all of you . I am so sorry for your loss and wish I knew what to say to help. I’m sending love and caring to all of you.

May God be with you during this difficult time. Our prayers are with the family.

Our Sincere Condolences to the Family of Eric Neal.

Many prayers for both families during this difficult time and the days to come.

This is such a tragic loss to everyone who knew him. He was a fine, young man. He managed to survive the 9th grade English class from Hades and go on to pull an A in Dual Credit Senior English. He will be greatly missed. My deepest condolences to his family, especially his wife and father.

Our heartfelt sympathy and prayers to all the Neal family. May God’s comfort be with each of you during the days ahead and always. You will all be in our prayers. Josh and Janis Premeaux

May all the prayers surround The Neal family during this time. and give you comfort. My heart is heavy for you guys.

My grandson Walker will miss his wrestling pal What a wonderful young man Keith, our prayers are with you. God has a better plan than we do

Eric was loved and admired by so many. Our family is heart broken for everyone over his passing. Sending love and prayers of peace.for The Neal Family.

I only knew Eric for a short time as part of my work family but his personality and good spirits were always the highlight for so many. This surely a tragic loss for all who knew him, he will be greatly missed. I'm so thankful you are resting in peace now! Prayers for Shelby and the rest of the family! He was a great man!

I am so very sorry for your loss. Eric was like my brother growing up. I will miss him everyday. My prayers to your family through this difficult time.

May God bless you all of your days Shelby, until you can be with him again.

Eric was so kind hearted. I set & watch the memorial video & I’m remembering all the times he was on my campus. & watching him grow up. Heaven got a great angel. Love to all❤️ Mrs. Anita