Eugene Thomas Corder was born in Leesville, Louisiana, on the 14th of January in 1931, the youngest child of Edward William Corder and Lola Ellen Crosby Corder.

He was a lifelong hunter and fisherman, gardener, and teller of tales. He graduated from Dayton High School in 1949, and worked for the Cotton Belt Railroad in Pine Bluff, Arkansas, in 1950. The following year, he enlisted in the U.S. Navy during the Korean Conflict.

After his honorary discharge, he was visiting relatives in Beaumont when he met Ruby Lee Alexander. In 1955, they married, and he also signed on to the Beaumont Police Department. Kelly Jean was born in 1961, and Laura Lee, the following year.

Gene and Ruby were married 54 years, and he rose in rank at BPD from Patrolman to Administrative Assistant to the Chief. He retired after 34 years, and they moved from Beaumont to Kirbyville on their own 22 wooded acres where they lived for nearly 30 years.

The family would like to thank the medical staff of Memorial Hermann Baptist Beaumont Hospital and those at Harbor Hospice for their loving care during the last few weeks. 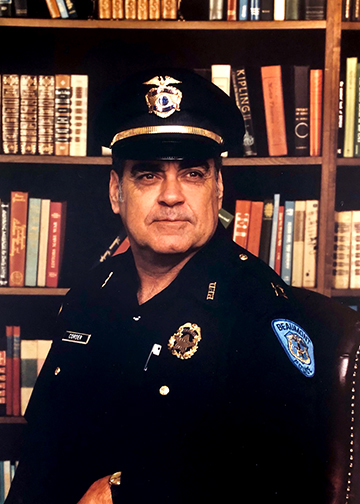 To The Corder Family. Captain Corder was the man that hired me into the Beaumont Police Department. Little did I know that he would become my mentor into that world. My intent was a couple of years at the BPD and it turned into a 25 year career. He was the one who made me realize that law enforcement was a way of life and not a job. He had a moral compass that led him in his life and as a police officer that was an example beyond what any of us knew. He did not need a law book because he used God’s book and the two were never at odds. And if he influenced me that way, then he influenced hundreds. I will remember and miss him always.

Thank you, Barry. Know that you were one of “his”, and he was proud of you.

Thank you, Lon, for your kind words and prayers.

Kelly and Laura, we didn’t see this in time to attend the funeral, but we wanted to say that we remember your family fondly as driveway neighbors on Ferndale Dr. Praying for all of you during this time.

We have happy memories of your family! Thank you for your thoughts and prayers.

The hardest thing I ever had to do at BPD was to tell Capt. Corder I was going to resign. He was always a stand-up guy that I held in high regard and can truthfully say that this world surely lost a good and godly man. Godspeed Capt.

What sweet words! Thank you for thinking of us.

Thank you, sweet ladies! Thankful for your prayers every day.

Even though we shared the same name with no known relation, we did share a relationship through Christ. We remember fondly Gene and Ruby and their kindness when we as a young couple, with a small child, moved to Beaumont. We pray for comfort and peace for Kelly and Laura as the grief enfolds you. Hang on to memories and remember the promises of God. Hugs to you all and may god bless you richly.

Thank you so much for all your prayers and kindnesses. Happy memories! God has indeed blessed us richly!

We are so sorry for your loss. I married into the family but Uncle Gene always made me feel so welcome from the very beginning. He would light up the room when he walked in and always greeted with the most loving hug. I could not wait to sit down and hear one of his adventurous stories. Uncle Gene was one amazing man and will be Greatly Missed. Prayers for all of you!

Thank you so much, sweetie! You are ‘new’ to the family, but rest assured that he loved you as much as those born into it. Thank you for remembering us with the beautiful red and white bouquet, and especially for your prayers.

Laura & Kelly, Our love and sympathy upon the passing of your dad. He was a mentor to Bill back in the day, and was such a good fellow and friend. We enjoyed knowing your family at Westgate CoC and being neighbors in Amelia. God bless you with comfort and great memories.

Thank you for those sweet words. We have many fond memories of that time too❤️

RIP Seaport. Was an honor working with you.

Thank you. He took a special interest in “his” officers❤️

My sincere condolences go out to the family and friends of this great man. I will remember the times I got to spend with him and that handsome smile. RIP my friend

Thank you, Linda. That is so kind of you to say.

a Godly ,caring ,inspirational leader. a friend of many & a Brother in Blue.You have influenced & changed a countless number of lives with your Life as a testimony.
Salute Captain Seaport !

What a wonderful tribute. Thank you.

Prayers for the Corder family. Captain Corder (Seaport) was one of the best. God bless.

Thank you so much. We’ve felt your prayers.

Capt. Corder was one of the best men I have ever known. He left an impressive legacy like I’ve never before witnessed. He truly loved just about everybody and we all loved him. He helped many people without giving it a second thought. I will always love you, sweet friend.

Thank you, Carolyn. You’ve always held a special place in his heart, as with all of us. Love you.