She moved to Beaumont, Texas in 1936 and attended South Park Schools and Lamar College.

Grace worked at Mobiloil Federal Credit Union for 30 years and served in many capacities. She retired in 1990 while serving as a Branch Manager.

On November 21st, 1979, Grace united in marriage with Gene Palmer. They lived in Beaumont until 1996 when they moved to Lumberton where they resided until Gene’s death in 2015. In 2016, Grace moved to Kerrville, Texas and lived with her daughter Pam and David.

She was a devoted and lifelong member of the Beaumont Seventh-Day Adventist Church during which time she served as teacher, treasurer and enjoyed missionary trips. She and her husband Gene went on several missionary trips to Mexico to build churches. Grace and Gene were in their early 70’s when they made these trips in rather primitive conditions but never complained once, always praising the trips as such a great blessing! Into their 80’s they also delivered Meals on Wheels for years to seniors in the local community.

Mike Orcutt, one of the Beaumont SDA members, said this about Grace:

“Grace was everyone’s Mom, or Grandmother. The only thing that surpassed her love for her family was her love for Jesus. She was a very loving and giving person. Always smiling, always with a kind word for someone. I never ever heard her say an unkind word about anyone. She didn’t spread gossip, only love for Jesus and others. While we grieve, we know the next Person that Grace will see is her beloved Saviour. The Bible says in Matthew chapter 5, Blessed are they that mourn, for they shall be comforted.” We can claim that promise today, as God wraps His everlasting arms of love around us in our sorrow.

Survivors include her daughter, Pam and son-in-law, David Chance; grandson, Justin Chance and fiancé Isabel Camarillo, and sons Isaiah and Jeremiah Herrera; grandson, Cody Chance and wife Haley, and daughter Thea Grace, who was Grace’s first great-grandchild and namesake; Dalton Wharton, Grace’s nephew who lives with his wife Connie in Weatherford, and their daughters, Wendy Wharton of Weatherford and Stephannie and her husband Gene Vilaros of Fort Worth. 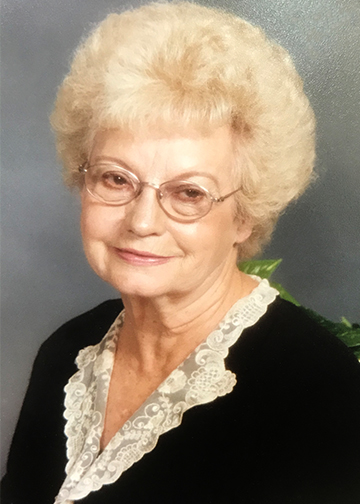 A Gathering of Mrs. Palmer's Family and Friends

A Gathering of Mrs. Palmer's Family and Friends

I remember Grace hiring me at Mobil back in 1984 she was such a loving boss and friend. Heaven gained a true angel. Prayers to the family .

Such a beautiful lady with a beautiful heart and soul and I always loved coming and staying with she and Pam in the summer months when I was a teenager! ❤️❤️❤️

"Miss Grace" was always my "go to" at the Credit Union when I needed a loan. ALL I had to do was make a phone call & she handled the rest. She has been a part of my life for over 40 years. Heaven gained a sweet sweet angel!

Our since sympathy to Pam, David and family in the loss of your sweet mother. May 7, 1973 was the day that Grace Goff became one of the most influentiential people in my entire life. It was the day I was hired at Mobil Oil Federal Credit Union. I met a woman, who was recently widowed, that was not only extremely strong and intelligent; knew her job; was all about doing the very best job for our members; teaching us newcomers all about credit unions; while, all day, every day, being true to her faith and being the sweetest most compassionate person I had ever met. For 25+ years, she was a true friend,co-worker and best boss ever! Her time on earth was well spent. She loved God and her fellow man and did so much for so many! She was an angel among us who was so loved and respected.

Our sympathy and Prayers. Grace was such a wonder person and so kind. Rest in Peace.

I was so honored to work Saturday's at Mobiloil Federal Credit Union with Grace teaching me how to work up loan papers, from loans made during the week, it was 1966, and I was working part-time at another local credit union, when Mr. Helpinstill hired me to come in on Saturday mornings as a clerk to assist Grace, she was absolutely one of the nicest people I had ever met, and she inspired me to learn all I could about serving our members, and I ended up working in credit unions for 46+ years. I really always loved her dearly, and looked forward to our Saturday catch up work sessions. My sincere condolences to her family, she was one in a million to everyone who knew her, prayers and hugs to each of you,