At the age of 15, he joined the Civilian Conservation Corps and was stationed in Richton, Mississippi. At the age of 17, he enlisted in the United States Coast Guard in October of 1942. J.C. was assigned to the USS Peterson, a destroyer escort, that was built in Orange. The Peterson was assigned to sub watch in the Atlantic. J.C. was discharged early in January 1944 due to his eyesight after serving fourteen months in the United States Coast Guard.

After discharge he traveled back to Laurel, Mississippi, in Jones County where he and his future wife began dating and on July 6, 1944, were married in her parents’ home. In July of this year they celebrated their 75th wedding anniversary.

In 1949 they moved to Port Arthur where he went to work for the Port Arthur Fire Department. After a few years as a fireman, J.C. found an opportunity with the Port Arthur Postal Service where he worked until he retired in 1978. During the mid 60’s, J.C. developed a hobby building or crafting guitars and mandolins. His instruments have brought joy to many people and he never sold them; he gave the gift of music to so many including his children.

J.C. and Caudie were blessed with three children, James “Jimmy” C. Owens, Ronnie E. Owens, and Vila Suzanne Owens. He was surprised by his children and their spouses with ten grandchildren; thirteen great-grandchildren; and four great-great-grandchildren. He is preceded in death by his parents; the love of his life, Caudie Owens; and four brothers. 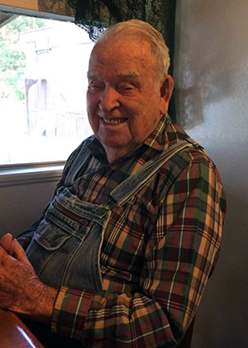 Dear Jimmy, Ronnie, Suzanne and all the families, Our thoughts and prayers and love are with you all during this time. So grateful that Mom and I had our time with Uncle JC and Aunt Caudie on Thanksgiving 2018, and will be cherished always and forever, along with all the numerous trips for vacations growing up all the years we traveled from SC to Texas. All the family singings we had and shared,. JC on the harmonica and Caudie on the piano. All the stories from JC, the laughter and tears we shared together. Love them so much and will miss them both greatly, but know we'll all be together again one day! Love, Mark and Marilynn English

He.was a dear friend, and i will miss him.He is playing his french harps in heaven And sister Claudia is looking up at him as she plays piano..my prays go with the whole family.They raised their Childern in a reglious home thank god for all of them

So very sorry for your loss.. Jimmy, Just found out this morning (22nd) about your Dad. I remember your family from our growing up in church together. Would love to hear from you. I have lost your contact information that I had from a few years ago.