Our beloved John Melvin Blackwell, born June 17, 1934, aged 87, passed away peacefully on March 27, 2022.  A long-time resident of Beaumont, Texas, he was the son of Melvin and Melwood Blackwell, who preceded him in death, as did his sister Judy Blackwell.

John was known by many people across the Beaumont area and state of Texas. To his family, he was Dad, Daddy, Johnny and Papa John.  To most of his friends, he was Big John or Captain Snapper.  Once, Bob Hope referred to him as a Tall Drink of Water, during a concert.  Other friends called him that, as well.

John was born and grew up in Beaumont, Texas, the oldest of 3 brothers and a sister.  John and his siblings grew up very quickly and, as the oldest child, he had a big role in helping raise the family, including learning how to cook.  A skill that he honed and enjoyed over the course of his life.  All 3 of the Blackwell boys were good looking and strong as well as excellent athletes and their sister was a very talented musician. One of John’s first jobs was a newspaper boy and his pet myna bird rode on his handlebars and whistled at the girls along his route.

John graduated from Beaumont High School.  During that time, he excelled in track, while winning state championships in pole vaulting and setting two Texas records in track. He excelled in many other sports and was asked to catch batting practice for the Beaumont Exporters professional baseball team.  He ended up being awarded a full scholarship in Track and Field to the University of Texas.. John was training for the 1956 Olympics when, during practice, he unfortunately broke his back pole vaulting.  He was unable to compete in those games but his track relay team went on to compete in Melbourne, Australia.

In 1958, John married Mary “Sug” Seewald, a Beaumont native and, together they had 6 children, John, Kate, Alice, David, Jerry and Ricky over their 29 year marriage.  Over many years they enjoyed family beach trips, fishing, hunting, shrimping adventures and ski trips to Colorado.  Family was always very important to John, and he liked nothing more than taking friends and family out for fishing trips in the Gulf. He was so very proud of his children and grandchildren and the door was always open to friends – that way he could keep an eye out and be with everyone.

In 1958, John began a career in insurance.    Then in 1963, he transitioned to the real estate business, where he was one of the first homebuilders to begin building energy efficient homes, buying and selling land, developing sub-divisions, apartments, office buildings and houses, in and around Beaumont and throughout the state of Texas.  He brought the Beaumont Hilton and the Plaza National Bank to Beaumont.  The Beaumont Enterprise named him Outstanding Businessman of the Year.

While real estate started to turn in the 1980’s John began Beaumont Warehouse and Trucking, then JMB Trucking and Warehousing with his son, Ricky..

John and Linda Gail Harris married in 1993 and have shared a loving life, filled with numerous dogs, family and beach time, boats and fishing adventures.

One of the keys to John’s longevity was that he lived everyday with an attitude of when the going gets tough the tough get going.  He lived by the Golden Rule and was a kind and generous person to many. It was easy for him to go out of his way for a friend, but John routinely helped acquaintances or strangers or anyone down on their luck.  He has passed down much of his philosophy to those he loved – whether related to athletics, academics, or career.  The family can’t begin to express how much we will miss John.  We also know he led a wonderful life, and we celebrate his life and will continue his legacy in all that we do.  We pray, as John enters The Kingdom and after he greets old friends and family that he will have time for more hunting and fishing trips.

John has enjoyed good health for most of his life.  However, recently he required healthcare support.  Would like to thank Best Hospice Long Term Care for the excellent care they provided the last days of John’s life.   We are most grateful for the love and support of his dear friends whom he considered family, as well as members of his church family at First Baptist Church in Hamshire.

In lieu of flowers, donations may be made in the name of John M. Blackwell to First Baptist Church of Hamshire Food Bank, P.O. Box 369, Hamshire, Texas 77622; The Humane Society of Southeast Texas, 2050 Spindletop Avenue, Beaumont, Texas 77705; or the charity of your choice.

May the Peace, which passes all understanding, keep your hearts and minds in the knowledge and love of God, and may the blessing of the Father, the Son, and the Holy Spirit, be with you, and remain with you, always. 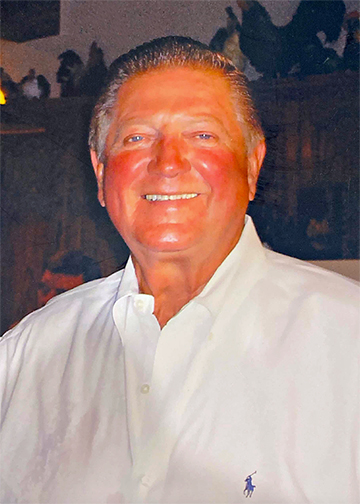 Sorry for the family’s loss, my deepest sympathies to all. John’s life was well lived, which is truly a blessing.. He thoroughly enjoyed himself and life, it made me feel better to see and hear from him.

John was a great guy had some great off shore trips with him. My prayers go out to the family he will be greatly missed.

We feel so lucky to have John as a friend in our lives. He was always a gentleman with a smile. Our deepest sympathy goes out to Linda Gail and family. John’s memories will live on for anyone that had the privilege to know him. Peace be with you.

Linda Gail and family we are so sorry for your great loss. How lucky you have all been to have such a wonderful man in your lives. Love, peace and comfort to all of you. Many prayers Robin and Herman Gerhardt

Very sorry to hear about John. We go back to Boy Scouts through His fantastic life. May His Soul, Rest in peace.

We are so very sorry for your loss. Heartfelt prayers and comfort coming to you and your family. John will be missed by many.

John was a long time member here at our fitness club called the CHRISTUS HWC. Everyone loved him and he was always kind hearted and full of life. Myself and everyone that works here at the CHRISTUS HWC send our deepest condolences and love to the entire Blackwell family.

I’ll never forget meeting John and Linda Gail the first time at a Boogies tournament. Wonderful people and their love stood out. Our love goes out to their huge extended family and friends. Heaven just got “a big one”.

Randy and Happy – sending prayers to the Blackwell boys on the loss of their brother, John. Continued prayers for all during this difficult time for the entire family.

John was such an influential, dynamic man. He was loved and respected by all those who knew him. He will be missed every day. My prayers and condolences are with his family and friends. Love, Phyllis Worthington

Linda Gail and family, Deeply sorry for your loss.

To the Blackwell family, I am so sorry for your loss. May John rest in the arms of the angels.

Linda Gail, Donnie & I are so sorry to hear about John. He was such a great guy…we know his loss is huge for you. All our love, thoughts & prayers are with you & your family.

Our prayers are with you and your family

Very sorry for your loss Ricky. You and your family will be in our prayers!

So sorry to hear about John’s passing. Prayers to you and your family

Rest In Peace John. We will miss you and your laughter. Praying for your loved ones.

Dearest Linda Gail, my heart is heavy to learn of John’s passing. He will be missed by so many friends along with your family. In the years I knew John, he was always such a gentleman, kind and caring. I am praying for your strength and courage to carry on during this painful time. May he rest in the arms of our Lord, Jesus Christ.

Our thoughts and prayers are with you all. So sorry for your loss.

I am so sorry for your loss, Linda Gayle. I am also sad for Kate, Alice, David, Jerry and. Rickey There. Is no loss like a strong father. And John was that, I wish all of you peace in your grief.
Love Margaret Green. A beach buddy !

There will be a empty place in my life.

Linda Gail & family, are thoughts & prayers are with you all. He will be missed by many. So glad he was able to live a long & happy life. We will always be grateful for the wonderful meals he has provided for many friends.
Love you Linda Gail

so sorry to hear about John’s death my thoughts and prayers are with the family. Rest in peace.