Joseph Paul Stockert, 87, passed away on October 22, 2020, in Beaumont, TX after a long life well lived, and a brief but serious illness. He was born May 28, 1933, at St. Mary’s Hospital in Grand Junction, CO, the youngest of four children of Anthony and Bessie Stockert, both military veterans. A child of the depression era, until he was three he lived on the Miller family homestead near Collbran, CO, in a modest log house with no running water. The family moved in 1936 to Fruitvale, CO in the Grand Valley.   He attended Fruitvale schools through 9th grade when, after his father’s death in 1947, he and his mother moved to the family dairy on Pritchard Mesa, east of Fruita, CO.

As a boy Joe loved outdoor trips on the Grand Mesa in Colorado. Tragically though, in 1950, he was with his older brother, Howard, a decorated Navy pilot, when Howard and a Navy buddy drowned in Cottonwood Lake when the rubber raft they were all fishing in collapsed.

After graduating from Fruita Union High School in 1951, Joe attended Mesa Junior College in Grand Junction. Following in the footsteps of his deceased older brother, he joined the Navy in 1953, near the end of the Korean War. He served four years on the Destroyers USS Sproston and USS Silverstein, both home ported at Pearl Harbor, achieving the rank of Radarman 1st Class. While on the Silverstein, he participated in Operation Redwing nuclear tests. In the Navy, he developed a love for the Pacific and later in life would cherish the trips he was able to take to Hawaii and New Zealand.

After his service and honorable discharge, Joe returned to Grand Junction to continue his schooling on the G.I. Bill, graduating from Mesa Junior College in 1958 with an AS degree in Engineering. He went on to the University of Colorado in Boulder and graduated in 1961 with a BS degree in Electrical Engineering. He made close friendships at CU he would cherish all his life. A steadfast fan of the Colorado Buffaloes, on game days he could be heard shouting “Defense! Defense! Defense!” from the stands at Folsom Field or from his chair in front of the tv.

During his senior year at CU, he met his first great love, Ray Ann Ross. They were married in 1961. After living briefly in the Los Angeles area, where their first son was born, he and Ray Ann moved in 1962 to Arvada, CO, where they would have two more sons and live the remaining 36 years of their life together. In 1966, he joined IBM and worked until his retirement in 1995 as an Engineer at the company’s manufacturing facility in Niwot, CO.

A dedicated family man, Joe bought a property with Ray Ann in Blue River, outside Breckenridge, CO, where they built a modest A-frame cabin and where the family spent most weekends together hiking, skiing, camping or fishing on Goose Pasture Tarn. A series of International Scouts transported the family on those adventures. The cabin in Blue River, expanded to accommodate grandchildren, remains the focus of the family’s love of the outdoors 50 years later. When he wasn’t outdoors, he could be found on the dance floor, and was an avid square and ballroom dancer.

Ray Ann passed away in 1997 after battling ovarian cancer with Joe at her side. In 1999, he married his second great love, Marilyn (Suzy) Hall. Suzy, a widow and mother of three, grew up with Ray Ann in Morton, a small town in the Panhandle of Texas. After their marriage, he and Suzy made their homes in Beaumont (winter), and in Colorado (summer). They were married for more than 20 years, marking the second strong and dedicated marriage in his life. He and Suzy became an important part of the lives of each other’s children and grandchildren.

Joe and Suzy enjoyed traveling, card games (Books and Runs) and anything involving good food, especially his beloved Monterey House, in Arvada, where he indulged in green chile smothered burritos for more than 30 years.  Both he and Suzy have been active members of Trinity United Methodist Church in Beaumont, where he especially enjoyed his work with the Trinity Army, a group of men who volunteered together to build wheelchair ramps for members of the community.

Joe is survived by his wife, Suzy, and her children, Scott and Melanie Hall of Beaumont, Ellen and Curt Selman of Plano, TX, and Matt Hall and longtime girlfriend, Rebecca Pope, of Austin, TX; and grandchildren, Caroline, Abby, Jack and Sam Hall, and Charlie and Catherine Selman.

He is survived by his children, Dave Stockert and Cammie Ives, of Atlanta, GA, Scott and Julie Stockert, of Longmont, CO, and Jon and Erin Stockert, of Cincinnati, OH; and grandchildren, Olivia Stockert and Charles Walker, Emily, Joe, Sadie, Ben, Drew and Nathan Stockert, to all of whom he was affectionately known as “Gramps.”

In lieu of flowers, the family requests that any memorial gifts be made to Trinity United Methodist Church, P.O. Box 5247, Beaumont, TX 77726. 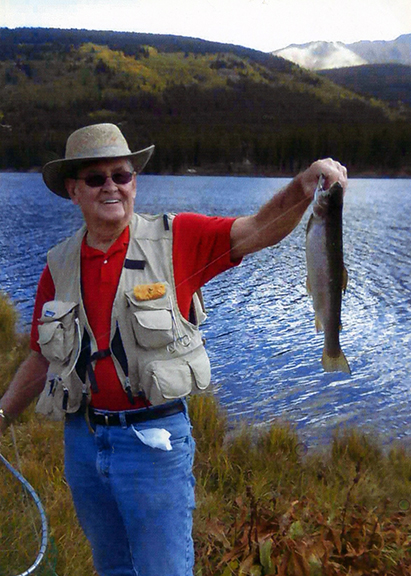 May God have a special place in his Heavenly House for Joe.....Joe worked with our Trinity Army Mission , whatever mission project we were involved in, Joe was there helping ..... Weâ€™ll miss you & Thank you for all you did in our Church Mission work.......Joe, May you Rest In Peace ..... Our Thoughts & Prayers go out to Suzy & family..... Ronnie & Mary Moses......

My sincerest condolences to the family. Prayers for peace and comfort.

Suzy, I was so sorry to hear of Joe's passing.

So sorry to hear about Joeâ€™s passing. Raymond and Katie Ross were our neighbors for years, so we met Joe and Ray Ann and their children. Suzy, our thoughts and prayers are with yours and Joeâ€™s families and children.

Joe was a wonderful father, Grandfather, and husband! He was the patriarch of a wonderful and loving family! We will miss him greatly and are better for having known him. We love you all! Suzy, you were a loving wife! â¤ï¸