Larry Lyn Copeland, 79, passed away on September 24, 2020, at CHI St. Luke’s Hospital in Houston, Texas, after complications from pneumonia.

Larry was born on July 12, 1941, in Fort Worth, Texas, to Edgar and Betty Copeland. He grew up in Austin where he graduated from Stephen F. Austin High School, excelling in gymnastics. He went on to study Business Administration at both Southwest Texas State College, San Marcos, and Texas A&M University. His telephone career began in 1964 at Southwestern Bell in Huntsville, Texas, as a business representative. Outside his career Larry obtained his pilot’s license. He retired after 27 years from SBC/AT&T after holding several different management positions.

After retiring, Larry became an avid golfer. He also enjoyed cooking, gardening, creative tinkering, beachcombing, and became quite the handyman. And, Larry loved his fur babies, Sally and Pepper.

He was preceded in death by his parents, and sister, Barbara Greer. 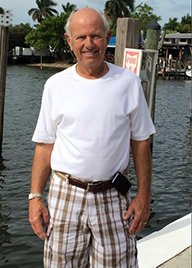 Lillian, our prayers and thoughts are for you during this time...

Dearest Lillian, words inadequate at a time like this, but please know that you are in our thoughts and prayers. We pray your special memories will be a source of comfort in the days ahead.

You are in our prayers! So sorry for you loss!

We will miss Larry, he was a friend and such a nice person. I am so glad we got a chance to spend time with him and you in San Antonio before covid.. We will be thinking of you and just know we care.. .

Dear Lillian you are in the forefront of my thoughts and prayers. Peace and rest be with you. Big hug much love Karen

I had the privilege of working for Larry early in my att career. He was kind and considerate and taught me a lot .

Dear Lillian, so sorry to hear about Larryâ€™s passing. Thinking of you during this most difficult time.

Lillian, we were so sorry to hear of this. sad news He must have been a wonderful man. .Please know that our prayers are with you and your family. May God bless you always.

Lillian, I am so sorry to hear of your & your families loss. There are no words to express how my heart hurts for you; just know you & your family are in my prayers & thoughts. Godâ€™s Peace & Comfort for each of you today, tomorrow & days to come...

Lillian: So very sorry to hear of Larryâ€™s passing. He was one-of-a-kind. I am thankful to have worked for him at Southwestern Bell & to have him as a brother-in-law. He always made me laugh! May God be with you & your family. Prayers for all of you during this difficult time. Always, Gina Anniboli

Hearing about Uncle Larry passing was a sad, sad thing... I remember that he always had a smile and a laugh about everything, and he was always happy to talk about golf :) It feels like such a long time since I last saw him, and maybe it was too long, but I realized in watching the keepsake video that he never really changed for as long as I knew him. He always looked the same, he was always the same caring person, and I will remember and miss him. Love Always.

Lillian, Billy and I were so sad to hear of Larryâ€™s passing.. We are keeping you in our thoughts and prayers..

Lillian, l am so sorry to hear about Larryâ€™s passing. You and the family will be in my prayers! I loved the time I was able to work with Larry and spend time with him.

Lillian I was so shocked to find out that we lost Larry. He was always an inspiration to me and other than my parents was the first person who ever tried to push me to broaden my horizons. He was a special person and will be truly missed by all.