Malcolm Morris Williams, 92, of Beaumont, Texas died peacefully on June 1, 2022. Malcolm was born in El Dorado, Arkansas and moved to Silsbee, Texas at an early age. He attended Silsbee High School and was voted most popular by the class of 1946.  Following High School, he attended Texas A&M University and was in the Class of ‘50 graduating with a degree in Engineering.  Malcolm served his country in the Korean War and worked for Gulf State Utilities his entire career.  He married Joyce Mack in the summer of 1956, and they were married for 62 years. After living in Lake Charles and Lafayette, Louisiana they moved to Beaumont where he has resided for the past 54 years.

Malcolm was a wonderful husband, father, grandfather, with a gift of wit and humor.  He loved traveling the world, rural road trips, duck hunting and fishing. He was a devout Episcopalian and man of faith. Nothing was more important than his family, church, and community service. Malcolm served as a volunteer at St. Marks Annual Chili Bazaar for almost 50 years, volunteered at Some Other Place, once a week, for 40 years and participated in charitable chili cook offs through the Chili Appreciation Society International. Malcolm was also loyal to his Aggie family and Texas A&M University. Every come from behind victory you would often hear him say “Never a Doubt”.  He never gave up on his favorite team.

He was preceded in death by his parents, Malcolm Morris and Katherine Elizabeth Sellers Williams, and his wife Joyce. 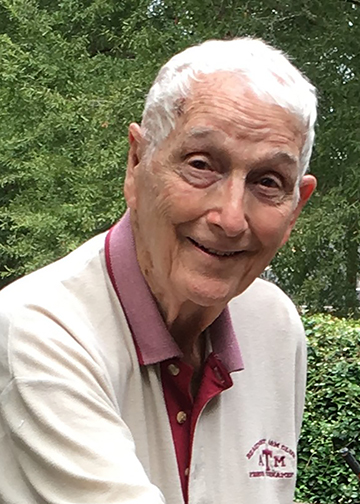 Love and prayers. Malcolm was family to us. I’m sure they are telling new fish stories on the other side!

Malcom and Joyce were two of the finest people I have known. Mr. Williams and I shared the same birthday and never in my 53 years, did he fail to reach out to say “Hey!” on this special day. Their kindness and generosity to both my parents knew no limits. Mrs. Williams always “told it like it was” and Mr. Williams never failed to bring humor, levity, and love to any situation. As the William’s knew our parents long before any of us were born, my sisters and I were honored for the role they played in our lives and send our love and prayers for peace to Kathryn, Karen, and their families. (There have never been two grandparents prouder!!!!)

Malcolm or “Squirt” as he was known during his days as a student at Texas A&M, was a member of the B Battery Artillery Unit of the Corps of Cadets with my dad, Macyl Keith Orman. As the years passed, the B Battery Artillery “Men” started meeting annually, usually at an interesting Texas town with great shopping for their wives. They would play golf, drink beer, snack on home made goodies, share meals and stories, critique the year’s football games and ended their time together, robustly singing together the Spirit of Aggieland and Aggie War Hymn. Squirt wrote a terrific article about the accomplishments of the Class of ’50 B Battery Men that was published in the Aggie Magazine. Squirt was truly a shining example of The Greatest Generation, and I, for one, will extremely miss his presence here in Earth. “There’s a Spirit that can ne’er be told…” Gig ’em Aggies! See you soon, Squirt!

So sorry to hear of Malcolm’s passing. I met Malcolm many years ago volunteering at Some Other Place. Malcolm and his crew were so welcoming to me that I changed my day off to go on and volunteer many many more years to enjoy their company. Him and his wife Joyce brought so much joy and I loved listening to the stories they shared about their kids , grandkids and their marriage. His beautiful soul will be deeply missed.
Sending my sincerest condolences to his loving family and close friends .