Mary Alice Matte Guidry was born April 17, 1929 in Big Lake, Cameron Parish, Louisiana to Lorenza and Eva Matte. She was born in her parents’ home and delivered by a midwife. She was named after her mother’s sister, who had died during a Typhoid epidemic in October 1916. Her mother had lost a brother also, a month earlier in September 1916.

When she was born her father was a tenant farmer. He had followed his father from Church Point, Louisiana who had moved to nearby Sweetlake the year before. She grew up in their community with many aunts, uncles and cousins around to play with. Her family was religious, they lived close to the Catholic church in Big Lake and would walk to church on Sunday mornings. Every night before bedtime the family would gather in the living room when the parents called them and they would all kneel to recite the rosary. At the end of the rosary, they would pray for the intercession of St. Joseph to grant them a Holy death. She was confirmed by Bishop Jeanmard while Pius VII was pope.

Through her childhood the family moved to different farms sharecropping trying to make a better life.  Most every year they would miss the first six weeks of school because they were busy helping to pick cotton. When they travelled between farms it was by a horse-drawn wagon. Her father’s dad lived about 12 miles away so when they’d visit, they’d have to spend the night and go home the next afternoon. They didn’t do that often because it was difficult with that many children, farm duties and the weather had to be good.

Her mother was an excellent seamstress who didn’t need a pattern but, could look at a picture in a catalog and make the exact piece of clothing. She sewed for all of her family and also for some of the neighbors and didn’t charge them anything. They didn’t have any money but, they raised everything they needed to eat. Chickens, hogs, a few cows for milking. They planted corn, tomatoes, melons, peanuts, popcorn and soy beans. In the winter they would butcher hogs to make sausage and bacon. The only groceries they would buy were flour, sugar and coffee beans that they would roast themselves. Often, they went to school barefooted, most of the other children were in the same boat so, they didn’t know they were poor. She grew up in a home where her mother cooked on a wood stove in the winter and summer and would can vegetables on that stove in the heat of summer. She shared beds with her sisters and often two beds in the room. For refrigeration, the ice man would deliver blocks of ice once a week for the “ice box”. Sometimes they’d buy ice just to make ice cream in a hand-churned freezer as many as seven freezers in one afternoon.

At Christmas, Santa would come in a tugboat sounding a siren down the Intracoastal Canal to the ferry landing and give apple, oranges, nuts and small toys such as dolls, jacks or marbles to the children in the community that ran to gather there.

Her mother and father would help harvest other farms such as rice and sugar cane for trade. They’d often have about 800 to 1,000 lbs of rice stored in a bedroom and several gallons of syrup that was traded for labor. Her mother would order material and dress goods from the Sears Roebuck catalog and it was an exciting time when the mailman would deliver the package of supplies. The children would share household chores so their mother could spend time sewing.

She graduated high school at Grandlake in 1946 at the age of seventeen; at the time there were only eleven grades.

Sometime after graduating high school, she moved to Lake Charles with her sisters and cousins and rented an apartment together so they could get jobs in town. Some of the places she worked were Walgreen’s Drug Store, Deluxe Café, The Snack Shack, the Post Office Café at the corner of Broad Street and Hodges in the Gayle Building, Joseph’s Drive-In near Locke Park and Woody’s Drive-In on Ryan Street. Later, she worked at the candy counter in Sears department store. Her manager told her that the candy department had been its most successful while she was there; then she moved to the girl’s department; that was her last job outside the home, she quit that job when she became pregnant for her second baby.

She was godmother to several of her nieces and nephews, everyone called her “Nanny”.

She married Ewell Thomas Guidry in July 1957, a month to the day after hurricane Audrey destroyed Cameron, Louisiana. They were married in St. Margaret Catholic Church in Lake Charles. Her first baby was a boy and was stillborn, then she had Leonard Scott, Russell Kent, then a miscarriage, then Warren Lorenzo, Quintin Errol, another boy was stillborn, Alyson Kay and Thomas Ewell, II. Thomas preceded her in death in July 2017. She raised all of her children in their home on Creole Street that they had since marriage. After all the children were grown and married they built a home south of town at the end of Pine Hill Street, next door to her sister Estelle and her son, Leonard.

She will be remembered for her example of faith and loved dearly her Catholic faith and attending Mass up until the COVID-19 pandemic. Her cooking and baking, her joy of life. She trusted her Lord and Savior, Jesus Christ. She was a perfect example of a prayer warrior. She was a member of St. Margaret Catholic Parish where she taught CCD and served as a Eucharistic Minister until moving south of town when she became a member of Christ the King Parish. She was a member of the Catholic Daughters of the Americas and Cajun French Music Association.

Memorial contributions may be made to Christ the King Catholic Church, 7680 Gulf Highway, Lake Charles, Louisiana 70607. 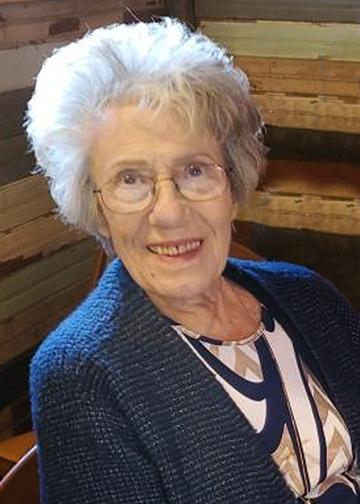 To the Guidry family and friends I offer my condolences. Mrs. Alice was one of the most loving, cheerful, and happy person I know. She could make anyone smile No matter what kind of day they were having. She definitely is loved and will be missed by everyone. Praying for all, my heart hurts for all, and love you all

Spending time with my Nanny and cousins Leonard, Warren, Russell and Quintion during the summers were the best! She always made my favorite sweets: sugar popcorn and sweet biscuts, and the best fudge cake ever! We'd ride the the big "bump" in the road and take our stomachs away and squeal with delight and then laugh till we cried. We were always laughing! Mary Alice was my go to person, my sweet, loving godmother, if I needed a laugh. What a laugh she had.! So contagious it was hard to stop! Your face would hurt, your belly would hurt and it was all good! While my Dad (Dalton) could put away shrimp, Nanny, hands down could eat anyone under the table when it came to crabs. No one could pick a crab clean like her! One summer I just had to have a bolero jacket. We found some curtain material and she whipped it out in an hour. I dragged that bolero jacket with me well into my thirties,, just because she made it for me. I will cherish those memories always. I will miss her laugh and one sweet song will be gone but never forgot. Rest now Nanny, You have a lot of people to meet up with. I know they will need a good laugh!!

I grew up a few streets over from the Guidryâ€™s on Hazel and had the privilege of knowing Mrs Guidry. Leonard and I were very good friends in School from Elementary to the time we graduated high school. What an amazing family! A true cajun family that understands that family comes first. The times that I had at the Guidryâ€™s was always exciting to say the least....all boys and one girl at the end. I will truly miss Mrs Guidry but I know her faith will bring her to her our lord and savior. She will now have time to spend with her son that passed away a few years ago. The entire Fontenot family would like to express our deepest condolences for your loss and will be praying for all of you. Good Bless!

Such a sweet & loving lady. All of the Marjnes & Marine wives always thought & loved her so much. She was always such a privilege to know. Please know that E. T. & all of you are in our prayers.

May you Rest In Peace Aunt Alice with all the loved ones who have gone before you We love you.

My condolences to you and your family Warren on the passing of your Mom. She lived an extraordinary life. She obviously was a blessing to many. May she rest in peace. Prayers for comfort and peace for you

Sending our condolences. Our prayers are with yâ€™all