Mike was a 1982 graduate of Bernards High School in Bernardsville, NJ and a 1987 graduate of Rice University in Houston, TX where he earned his BS in Economics. He began his business career with NCR Cash Register, later working in sales for Searle Pharmaceuticals. Then, after several years of learning how to fly that involved personal investments and sacrifices in hiring instructors, renting simulators and flying the Texas A&M Flying Club parachutists for free, Mike accumulated the substantial hours he needed to qualify for a commercial license to pursue a career in aviation and follow his true calling of becoming a commercial airline pilot. He started with Continental Express, followed by 20 years with Southwest Airlines, where he was employed as a captain at the time of his passing. Mike loved being a pilot and working with his fellow crew members. When they worked holidays, Mike didn’t miss a chance to extend his signature good cheer and love of celebration by bringing a tray of shrimp or charcuterie board to share with the crew.

Mike was a loyal, devoted and proud son, husband, father, brother and uncle who loved his family deeply and unconditionally. He innately embodied stability, strength, comfort, support, integrity, fun, laughter, adventure, ease and wisdom. Mike was a rare, irreplaceable, exceptional human, and those he loved knew real, true, everlasting love with him. How he lived and who he loved said everything about who he was… simply THE Best.

Mike and Edie traveled often to visit family and friends. If you invited him to join a trip, a gathering, a football game or other event and he said, “yes,” he would be there. If you recommended a book or a movie, he would call you shortly thereafter to share his thoughts, having taken your recommendation to heart. His “yes” was a complete and trustworthy “yes.” If there was a wedding, a new baby, a graduation, or other important milestone, Mike was there to celebrate. He showed up for those he loved when things were tough, too, routinely helping his friends cope with losses. Mike knew how to make you feel seen and special…on ordinary days and in extraordinary times.

Mike was passionate about living, loving and learning. He especially enjoyed good food, scuba diving and seeing live music at Red Rocks Amphitheater…no matter who was on stage, he simply loved being there.

Mike never knew a stranger. If you met him in a concert parking lot or on the beaches of Costa Rica, you would leave with a smile and a new friend. His kind and benevolent presence and his joyful laughter filled every space and uplifted the hearts of all those he encountered.

To carry on his memory and his legacy, Mike would have wanted everyone to find ways to connect and to be kind to one another. In the past, Mike made donations to St. Jude Children’s Research Hospital should you choose to donate to them in his name. https://fundraising.stjude.org/site/TR/GiftFunds/GiftFunds?px=7336011&pg=personal&fr_id=39300\

Both he and Edie were avid supporters of EAPL (Evergreen Animal Protective League) despite his aversion to dogs. Should you choose to donate, the link is https://eapl.com/donations

A memorial Service for Mike will be set at a later date. His cremation arrangements were handled by Broussard’s Crematorium, under the direction of Broussard’s, 2000 McFaddin Avenue, Beaumont. 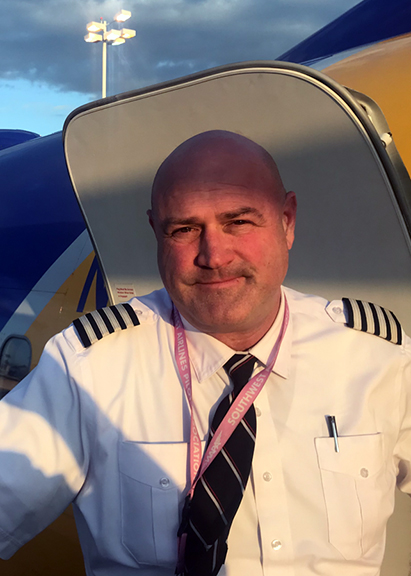 Mike, I will always remember you. You were always fun to work with at Searle. May God bless your family.

Despite our daily paths not crossing as much as I would have liked, I always felt him right there…loving his wife, guiding his children, supporting his sister, showing up for his nephew, being there for his mom, celebrating his friendships, and flying freely overhead…

For over 30 years, I had the profound privilege of knowing this extraordinary human and his beautiful family. And though his body has left this earthly realm, his influence, his memory and his laughter remain – coursing through my veins, occupying my thoughts, and visiting me in my dreams. He was that kind of person…one who became a part of you forever.

It was a blessing to meet you and go to A&P school with you and act like high schoolers in class again…. You will be missed and I pray for you and your family to find peace. God bless and tailwinds, my friend! 🙏

Jeremy,
Thank you so much for your sweet note. Mike enjoyed his friendship with you and spoke of you often.
Edie

To Mike’s Family and Friends,

A daily e-mail I receive related to all things “Rice U” included a note of Mike’s passing and a link to the obituary. I just want to say that it is one of the loveliest tributes I have ever read.

I was a bit behind Mike at school, but I find myself wishing I had met him there, or later. My sincere condolences.

What a sweet note. Yes, Mike was like no other. Truly an exceptional human.

I am so deeply sorry to hear of the loss of
Mike. May you all find peace during such a hard time . God bless you all !

Mike was so genuine. Hilarious! Great storyteller and had a great sense of people. He understood how to make you laugh with movements and emitted a genuine light. I am extremely saddened by the passing of Mike. I am blessed, to have met him, if only for brief moments. I wish the Cherubinos love and condolences.May you rest in peace Mike.

Thank you for this note Andres. So sweet.
Edie

Edie ,
I am stunned and so very sad to hear of Mikes passing.
My thoughts and prayers are with you and your family.
My you all find peace in the coming days.
Patty, Andi, and Jackson Yeakel.

Thank you Patty,
We are devastated and I appreciate your note.
Edie

EDIE I AM VERY SORRY FOR YOUR LOSS.YOU AND YOUR FAMILY ARE IN MY PRAYER’S.I KNOW THE LORDWILL ALWAYS BE THERE .ALWAYS

This is a great and true summary of how I also remember Bino. It has been a number of years since I last saw him, but the memories are still fresh in my mind. I remain inspired by how Bino lived his life, and am thankful for having the opportunity to know him.

Thank you so much for this note. And you are exactly right.
Edie

Edie, I’m so sorry to hear of your loss. I never met Mike but all the pictures of you and mike, you always looked so happy. Take all the happy memories and treasure them. My prayers are with you, Carley andPaul. Love you💕💕💕

Ruth, thank you so much for this note. We had a great life.
Edie

Mike, You will be forever missed and were such a huge presence in this world. I’m grateful for the times we had together and the memories we made. Until we meet again.

Dawn,
We all truly had the best last moments with Mike. You all made him so happy this Christmas.
Edie

That laugh…, comical impressions of relatives, and what a great cook!
While we shared the same size feet, no one could fill his shoes.
Unforgettable.

So true, John. Thank you for this sweet note,
Edie

I met Mike at COEX a long time ago and flew with him several times both at COEX and SWA. What a shock to learn of his passing. I am a better person for haven known Bino. God bless his family in this time.

Chris, thank you so much for your note. Indeed, all of our lives were enriched by Mike. He was so special.
Edie

I knew Mike for 24 years and have rarely met anyone who could hold a candle to his personality or his love of Family and friends.

I miss you my Brother! Rest In Peace and may God have mercy on your soul.

Thank you for this note, Hunter. Mike loved his friendship with you over the years.
Edie

My sweet friend, losing you has left a huge hole in my heart that can never be filled. You are such an amazing friend! Having you and your beautiful family in our lives has truly enriched ours. Words just aren’t enough to describe how deeply you will be missed. Life won’t be the same without your smile, kindness and laughter. Fly high my friend, until we meet again!

I love you Mike and will miss you forever. And don’t worry about Edie, Carly and Paul, we’ll take care of them and make sure they laugh again. Fly high buddy. Be seein you.

My Sweet Gina,
You’ve made this horrible pain of Mike passing so much more bearable. I love you. And Mike loved you,
Edie

This captures Uncle Mike beautifully. Although our hearts hurt, we are very grateful to be blessed by having Mike in our lives and all the wonderful memories we made together.

Fifi! Mike loved you. I’m so glad he was in your life and in Izzy’s life.
Edie