She grew up in West Orange New Jersey spent summers at Cape May and graduated from West Orange High School in 1949.

Pat attended the Hackensack Hospital School of Nursing in Hackensack New Jersey. She became a R.N. in 1953 after graduating from a 3-year program. Her Yearbook quotation was “Man has his will, but Woman has her way”. She worked as an R.N. throughout her life in various hospitals including Orange Hospital in Orange, New Jersey; Meriden Hospital in Meriden, Connecticut; Wuestoff Hospital in Cocoa, Florida; and Christus Southeast Texas – St. Elizabeth Hospital. Pat retired in 1998 from Beaumont Medical Surgical Hospital.

Pat was a passionate & compassionate R.N. a proud mother of four children, and an animal lover, who thoroughly enjoyed her gran- pups & gran-kitties. She enjoyed gardening, genealogy, knitting, sewing, was an avid reader. Her artistry in knitting created Barbie clothes, stocking hats, mittens, sweaters, and afghans. Pat passed down the skill down to her daughter.

She loved spending time with her family. She favored Christmas holidays, especially shopping with her daughters. She was not a passionate cook, so she gladly turned over the preparation of holidays feasts to her son in law, Bob. Pat was born in a time when an independent woman was not the norm. Her early family values created a strong independent woman who marched to the beat of her own drum.

She is preceded in death by parents, Estelle and Jack Boehner; sister, Joanne Boehner; and grandparents, Mary J. and August H. Ulrich, and Catherine V. and Charles J. Boehner.

The family asks that in lieu of flowers, donations be sent to the Wounded Warrior Project, P.O. Box 758516, Topeka, Kansas 66675 or the Humane Society of Southeast Texas, 2050 Spindle Top Avenue, Beaumont 77705.

Cremation arrangements for Ms. Fink were handled through Broussard’s Crematorium, under the direction of Broussard’s, 2000 McFaddin Avenue. There will be a small service for immediate family at Rosedale Cemetery, West Orange, New Jersey at a later date. 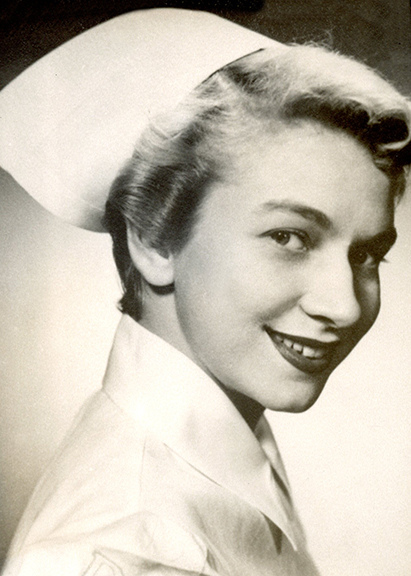 she was a nice lady

I had the pleasure of working with Pat at Beaumont Medical Surgical Hospital.. Pat was always so kind and she deeply cared for her patients. She taught me many things which I still use and remember to this day in my medical career field.. Prayers for her family. Rest in Peace Pat.

The world will always be just a bit darker with the passing of Pat’s light. She was one of the kindest and most generous people it has been my pleasure to know. My condolences and sympathies go out to all the family and friends who will feel her loss the most.

Our thoughts and prayers are with the family , I also worked with Pat In the hospital , ( the old MASH ), very respected , kind , great nurse , May God Bless you all and give you strength during this time ! With sympathy and prayers ! Jo Ann

Pat was one of my first nursing supervisors. We worked on the 5th floor(surgery floor) at the old MASH hospital together. She helped instill in me the way a patient should be treated and respected. I often think of her. She was kind, compassionate, but no nonsense kind of nurse. She was very professional and expected you to act accordingly. I have fond memories of working with her. Prayers to her family.