Peggie’s family moved to Freeport, Texas where she graduated from Freeport High School in 1952. She was an excellent student and was part of the student staff that produced the school newspaper. Peggie retired from Entergy Corporation in 1995 after thirty-seven years of service. Entergy was formerly Gulf States Utilities. In 1958 she met R.J. Stout at Gulf States Utilities company where they were both employed. They were married on June 13, 1959, and had one child, Pamela Renee Faulkner.

She worked as a volunteer at Christus Hospitals of Southeast Texas – St. Elizabeth for over thirty-five years. Peggie was an active Pilot Club member for many years. She was the 1982-1983 president and worked with the Beaumont Central High School Anchor Club, which was sponsored by the Pilot Club. Peggie was also an active member of the Forest Park United Methodist Church and worked in their thrift shop. She was a compassionate person, who was sensitive to the needs of others, and enjoyed writing letters and cards, which were entertaining and thoughtful.

Peggie was preceded in death by her parents; grandparents; Tabitha, and T.L. Park and Ora and Ruben Bullard; and siblings, Ralph Belton Bullard; Pat Bullard; and Jerry Frank Bullard.

In lieu of flowers, memorial contributions may be made to Forest Park United Methodist Church, 225 South Major Drive, Beaumont, Texas 77707.

A gathering of Mrs. Stout’s family and friends will begin at 12:00 p.m., with her memorial service to follow at 1:00 p.m., Friday, November 19, 2021, at Broussard’s, 2000 McFaddin Avenue, Beaumont. There will be a reception to follow her service at Forest Park United Methodist Church, 225 South Major Drive, Beaumont. Her cremation arrangements were handled through Broussard’s Crematorium, under the direction of Broussard’s, Beaumont. 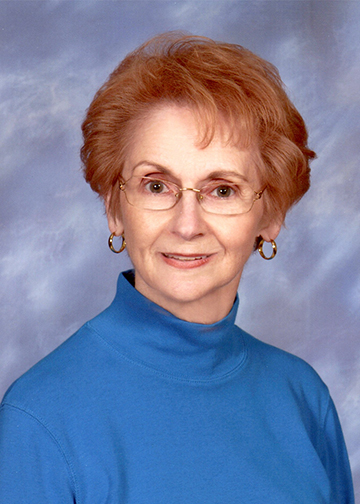 R J and Pamela I am so sorry for your loss. I new Peggy and you through Mildred and Bob Killbuck, Virgil and I lived next to the Killbucks on Caulder AVE. I Lost Virgil in March to Cancer and he went fast. I just came back to town. Please if you need anything please call 409-898-2627. I drive older people to the store and doctor. I love Mrs Peggy and Mrs. Frances Engelbrick. Love you all Ann Miller

That sweet woman is so easy to keep in memory.
A true role model for all. RIP Peggy

So sorry to hear about Peggy Stout. She was the nicest, kindest person when I started working there at GSU in the 70’s. We recently emailed each other about medical issues we both had. I shall miss her . My condolences to RJ and their family .

Peggie truly was a sweetheart. She worked 11 of those volunteer years at St. E while I was volunteer director. We also visited many times later at the
thrift shop. Her kindness will be a lasting memory.

RJ I am sorry for your loss. Peggy was an GSU friend. May God strengthen and comfort you.

R.J.
Your and Peggie’s visits to us as your neighbors meant so much to us. We will never forget. She was such a sweetheart. She will be so very very missed! Our sincere symphies and prayers are with you. If you need anything please let us know.

Paul and I send our deepest sympathy to R. J. and family…we worked at Gulf States with Peggy for many years. Peggy was one of my favorite people..so glad I got to know her….

I met Mrs. Peggy and Mr. R.J. thru my job;She knew exactly how she wanted things designed and Mr. R.J. just patiently stood beside her & let her talk.They are both the most sweetest, kindest people. I will miss seeing her in the Store. My condolences to Mr. R.J. & family.

RJ, My thoughts & prayers are with you
at this difficult time. Peggie was a marvelous person;loved by many!
I send my heartfelt sympathy to you.
In Christ’s amazing love,
Judy Baird

I am so so sorry to hear about Peggys death. You and your family are in my prayers.RiP sweet sweet lady.

Peggie was a dear friend for many years and enjoyed our many trips to Oklahoma. She will be
greatly missed, my thoughts and prayers for RJ and
family.

Peggie was the best bonus mom anyone could ever ask for. I will miss her.

I so loved sweet Peggie! I will miss her terribly,as she was always so kind to Jack and myself. Prayers and God’s Blessings to R.J.and family!

R.J. * you and your family have my deepest sympathy.

RJ and family. You are in our thoughts and prayers. She was such a sweetheart and will be missed by so many. RIP Peggy.