Michael loved to read and would often host philosophical discussions at the Farm. He was happiest sharing his love of art, music, and literature with anyone who would listen and was a true hippy and teacher at heart. He worked as a Journeyman Stagehand as a member of IATSE Local 183. He loved his family more than anything and was their biggest supporter. He will be remembered as a father, a Marine, a mentor, a friend and most importantly, a Pop.

Survivors include his son, Christian Sykes and wife, Amie Telano, of Hamshire and their two children Hannah Teresa and Jude Michael; daughter, Taryn Sykes, of Fannett and her daughter Grace Kathryn; brothers, Pat Sykes and wife, Laurie, of Colmesneil; Miles Sykes and wife, Madlyn, of Sour Lake; sister, Anne Sykes Hillin and husband, Nester, of Beaumont; sister in law, Barbara Sykes, of Conroe; former wife and mother of his children, Camille Sykes, of Fannett; and numerous nieces, nephews, and a host of other relatives and friends.

A gathering of Mr. Sykes’ family and friends will be 1:00 p.m., with his memorial service at 2:00 p.m., Friday, July 22, 2022, at Broussard’s, 134 West Buccaneer Drive, Winnie. His cremation arrangements will be handled under the direction of Broussard’s Crematorium, Beaumont. 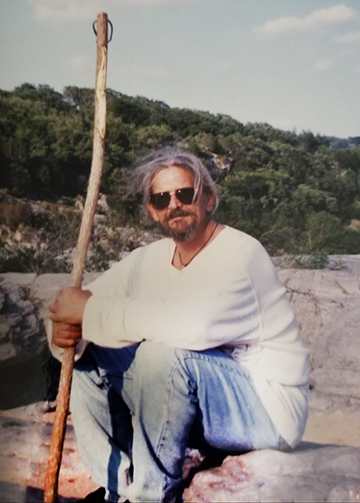 I am so sorry to hear of Mike’s passing. We went to St. Ann’s together, and dated some in high school. He was always a generous and gentle soul and a real gentleman. He even talked his father into piercing my ears for my 16th birthday. Lost touch after childhood, but he remains such a positive memory of that special time.

Mike was an interesting and unique person. May he rest in peace after all his suffering. We love y’all.

I was so sorry to hear of Mike’s passing. You all are in our thoughts and prayers.

Awww Mike a beautiful video tribute to your life….rest in peace and prayers to the Sykes family…

I am so sorry to hear of you loss. Your family is in my prayets

I knew Mike from KHS in the 60’s. We were.friends and worked together at KAYC radio for a while. He was very real. A warrior poet.

Michael Sykes was an intelligent, loving and peaceful man. He was a colleague and my dear friend. We met on facebook over a decade ago. Michael was the consummate purveyor of peace to thousands in his daily social media posts. So much gratitude to have known Michael Sykes!

So sorry to hear this. It is another great loss. I wish I could find the words. My heart breaks for you both. Love ya.

Sure sorry to hear of your Dad’s passing Christian & Taryn. I’m sure he & Kat are having a grand time catching up!

Pat…. Debbie and I are so sorry for your loss. May God bless you and your family during this time of sorrrow.

Please accept my heartfelt condolences. I never met Mike, but I felt as I If knew him through Camille. Camille I think of you often. I wish you well and pray that you’re living your life happily. As I read Mike’s obituary, he was admired with a gift of care for others. May memories ease the pain of loss to you and others.

He was one of the most loving, interesting, fantastic & silly friend in my life! I will miss him so much!

Dear, dear Sykes, I and my family send our deepest sympathy’s. You and he will always be dear to us.May Mike enjoy the -race he so deserves. love, Margaret Green

Sending condolences to all our Texas family. Mike was one of a kind and I know he’ll be missed. May He rest in peace with all of our loved ones who have gone before him.
With love and hugs,
Rochelle Sykes Bayless, Daniel, Matthew and Mark Bayless

Miles, I’m so sorry to hear about the death of your brother. You and your family will be in my THOUGHTS AND PRAYERS 🙏🙏🙏

We never did manage to meet in person, but I highly valued the person you were (three months younger than me!), your wisdom and insights. You will be very much missed.

We knew Michael on Facebook and he was our daily friend for several years. We enjoyed his insights and we found him a kindred spirit in so many things. He and my husband spoke on the phone in the last few months. We are so sorry to hear of his passing. Fare thee well to our dear friend.

A lovely man with many talents.
We are devastated by your loss.
Prayers for all the Sykes family.

I am so sorry for your loss hun

Taryn so sorry for u loss ,love to all u family.