Tom was very involved in his local community of Sour Lake and his church. He loved hunting, fishing, live music, and motorcycles.

Tom is preceded in death by his son, Ian Thomas Schwab and his parents, Carl and Helen Schwab. 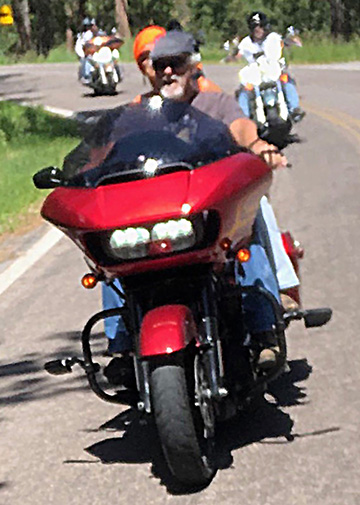 I’m very sorry to hear of Tom’s passing. Tom was a great friend who could “think outside the box” to fix pretty much anything, who’d do anything for you, and will be sorely missed. RIP old buddy.

Love you, Tom.
You’re the best friend I ever had. There will be no other. I’m thankful for the memories of the time we had together with our sons and afterwards.
I hope to see you again, soon.
Ray Baby

I am so sorry for the family’s loss. Tom was a great friend and always gave the best hugs. You will be missed by dear friend. Love you always.

Tom was a childhood friend and classmate, he was always kind and had a positive attitude. Thoughts and prayers to all of his family and friends. He is now reunited with all of those who have gone before in the Lord‘s house.🙏🤟

So sorry to hear about Tom’s passing. He was a great guy. Very friendly and a giving heart. He will be missed.

I’m sorry to hear about Tom’s passing. I enjoyed being with Tom in the Engineering business.

TOM, WILL BE MISSED BY MANY . HE WAS A GOOD CUSTOMER AT MY RESTAURANT AND A VERY LIKEABLE PERSON. R I P
TOM, FLY HIGH WITH YOUR ANGELS 😇 🙏🏻🙏🏻🙏🏻

I had the pleasure to work and ride with Tom over the years. He was a good friend and will be missed by many. Prayers to all of his family and friends. Till we meet again in the next ride my friend.

I am dear friends with Tom’s brother, Carl, and Carl’s wife, Dorothy. I did meet Tom when he was younger. The whole Schwab family are such wonderful and loving 💕people. My sincere condolences to Carl and Dorothy and to Tom’s whole family.

Tom was a member of the Cowboy HOG Chapter for many years. Sweet guy. Prayers to the family. RIP and enjoy the Harley Highway in Heaven.

So sorry to hear about Tom’s death. He was such a sweet and caring man. He would always hug me when I would see him at church. He will be missed❤️❤️❤️

I hired Tom to go to work for us in the instrument and electrical engineering group he was a good person friendly and well liked. All ways said yes sir to me all the he will be missed now he is in God’s hands. Robert Knost

Tom worked for me in the engineering group he was a good worker dedicated to his work sorry to hear that he passed away Robert
Knost. No

I am terribly sorry to read of Tom’s death. He always hugged me when we saw each other at church. He was a really sweet guy. Will keep his family in my prayers.

So long old friend. I will surely miss you. See you on the other side.

Will miss him , I’m sorry for the loss and to the family. No doubt he Is in a better place along side our Lord Jesus Christ. Catch you on the other side Tom. 🙏

Tom was a neighbor, friend, and like a brother. My entire family loved him. He watched out for my Dad, my Mom, and then my step Mom. He will be missed by many. My heart is with the family.

Our deepest condolences to the family.
Tom was such a sweet man whom we loved dearly.
He will certainly be missed by us all.
Our Prayers go out to all the family.

May your memories of Tom’s life well lived and loved bring comfort and peace to each. Our sincerest sympathies and condolences.

Tom was my auto shop teacher at Lumberton High School from 83-85. Learned a great deal from him about the automotive field and life in general. Saw him a few times after I graduated and unfortunately lost touch with him after that. May he rest in peace

Deepest condolences to the family. Tom was a good friend & will truly be missed.

Tom and I worked together and from the first day he made me feel welcome and always had interesting stories ! I ride a Harley I think it helped ! He will be missed by everyone who knew him !
A fun guy to be around ! My condolences to his family and friends !